RECALL MAYOR MICHAEL BLOOMBERG from his office in New York!

An Open Letter to the Mayor of New York, Michael Bloomberg

…you are a good mayor; through your reputation and your charitable unselfishness you are a legendary figure. But today we, your constituency, allies, and recent admirers, have need to engage you from a diametrically opposed position
we are initiators of a movement to recall you immediately from your post as Mayor of New York.
Копировать ссылку Отправить в email 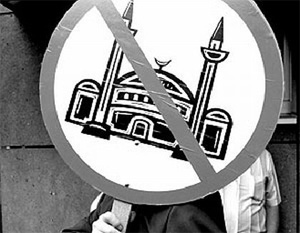 Not only residents of New York, but the American people from Coast to Coast cannot bear to accept that the site of the tragic deaths of thousands of innocent people, that ground, sacred to all Americans, would now give rise to minarets, from which we would all be forced to hear the fanatic call of Islamic murderers.

We feel compelled to appeal to you with this letter, although we write with pain and bitterness.  Very recently we voted that you would receive, for the first time in the history of New York, the honor of serving the Capital of the World as mayor for a third term.  We did this with total confidence and willingness, because you are a good mayor; through your reputation and your charitable unselfishness you are a legendary figure.   But today we, your constituency, allies, and recent admirers, have need to engage you from a diametrically opposed position:  we are initiators of a movement to recall you immediately from your post as Mayor of New York.

This painful decision was the result of your unprecedented betrayal of our interests and hopes, and by your betrayal of all pre-election promises to serve the city, executing the will of its citizens.    How could you dare approve the "Cordoba House" project, with plans to construct a high-rise mosque in the immediate vicinity of the tragic loss of life of almost 3,000 people at the hands of Islamic suicide-terrorists on 9/11/2001? It could hardly be that you were the personal initiator of such a scandalous and sacrilegious undertaking.   Maybe, someone (?) approached you with a favor (?), with some bit of advice (?), with some threat (?)  - something to support this project.  The fact, however, remains the same.  You agreed.  How could such a thing take place?

No one ordered you to so such a thing - not the President of the USA, not the Secretary of State - you are responsible only to the citizens of New York, who for the third time elected you to this highest post - the mayor of the Capital of the World.

You cannot be bought; you are one of the wealthiest persons of the country.
You cannot claim lack of information - you, of course, know the result of the Muslim attack that brought the deaths of 2,974 people, mostly civilians.  The total is mournful:  246 terrorist victims were the passengers and crew members of the planes, 2, 603 people in the New York World Trade Center and in the surrounding area, and 125 in the Pentagon.  People from the US and 91 other countries died that day.  Thousand of friends and relatives are also among the victims of this terror attack.  Islamists now, as if in an act of reconciliation, prepare to occupy this Holy of Holies of our national memory - Ground Zero - the site of the tragic deaths of thousands of people, resulting from the monstrous act of terror, which they, themselves, perpetuated.   How can we even speak of making peace?  Has it been proven that anyone other than radical Islamists are responsible for "Black Tuesday", 9/11, or has all suspicion been lifted from them in the matter?  Not in the least!   Here is what the President of the USA, Barack Hussein Obama, stated in his first address to the Muslim world in Cairo, 04 June 2009:

"Over seven years ago, the United States pursued al Qaeda and the Taliban with broad international support. We did not go by choice, we went because of necessity. I am aware that some question or justify the events of 9/11. But let us be clear: al Qaeda killed nearly 3,000 people on that day. The victims were innocent men, women and children from America and many other nations who had done nothing to harm anybody. And yet Al Qaeda chose to ruthlessly murder these people, claimed credit for the attack, and even now states their determination to kill on a massive scale. They have affiliates in many countries and are trying to expand their reach. These are not opinions to be debated; these are facts to be dealt with. (NY Times,
http://www.nytimes.com/2009/06/04/us/politics/04obama.text.html?pagewanted=3&_r=1 "

Could this be stated any more clearly?  There is no mention of any forgiveness or peace with Al-Qaeda.  Nevertheless, Obama extended his hand to the entire Muslim world, wishing to reestablish trust between them and the US.  But this overture was not met with a positive reaction:  heads of Al- Qaeda responded to Obama's speech with coarse insults, calling him a "house negro, serving his white masters" and only joined the Taliban in intensifying military actions against US and NATO troops in Afghanistan and Pakistan; Al-Qaeda cells are spreading and increasing their activities in various countries of Asia, Africa, Europe, and Eurasia; Iran has not altered its nuclear program by one iota.  And so the mutual opposition of the US and Islamism has not abated at all throughout the world, despite Obama's evident desire to begin everything anew "with a clean slate".
Is it possible that the Islamists have repented for their acts and have asked for forgiveness?  Nothing of the kind!  Muslims throughout the whole world, including the US, rejoiced in the grief of Americans.   In addition, they disseminate the notorious lie that 9/11 was the handiwork of the CIA and Mossad.

And what has changed right here in America, in New York, in the last approximate 10 years, that we should "embrace" Islamists?  Still not all the human remains have been extracted from the foundations of Ground Zero, still no memorial to the victims has been raised, and still no trial has been held for the organizers of this terrorist act (those captured mujahedin).  It just recently happened (1 May) that an American citizen, Faisal Shahzad, prepared an act of terror on Times Square, and then stated openly in court: "We Muslims are a united nation, and we will kill Americans anywhere and everywhere".  It was literally a miracle that the "Christmas" terrorist act fell through, in which a Muslim terrorist carried explosives onto a plane in his undershorts, and even earlier in November 2009 that a Muslim major in the medical service of the US Army, Nidal Malik Hasan, screaming "Allahu akbar!" shot and killed 13 coworkers and wounded more than 30 others.  So why should we erect at Ground Zero a monument to murderers?  Note, that in Muslim mentality every mosque is a monument!

Is it possible, Mr. Bloomberg, that you do not understand that bringing the "Cordoba House" project into reality is tantamount to erecting a monument to Hitler at Auschwitz, or a museum to the cadres of the Soviet Ministry of Internal Affairs at Katyn?

It is with anger that we condemn all the bureaucrats and elected officials who approved this project. Particularly reprehensible is the position taken by Congressman Jerrold Nadler, but in first place we name you, Michael Bloomberg, Mayor of New York, who betrayed his electorate and sanctioned the construction of this mosque.  You had absolutely no moral right to do this!  Imagine what Rudolph Giuliani would have done in this situation, he who ran Arafat from a diplomatic reception, and returned a check for 10 million dollars to the Saudi prince who attempted to establish America's "guilt" for the events of 9/11.  The President and State Department were extremely displeased with his actions, but Giuliani ignored their displeasure and acted as his conscience dictated.

And now you respond to criticism with pitiful, cowardly, politically correct phrases, referring to the Constitution, to the fact that religion and state are separate, and that no one, it seems, has the right to dictate to anyone else where and what to build.  No one is convinced by this, and you are without justification.
The reasons behind your committing such a shameful act -those are your problem.  But be aware of one thing:  you have crossed out your entire glorious political career and will remain in the history of New York as a person who betrayed his electorate, his nation.  And we are taking action as our conscience demands:  we are collecting signatures, demanding that Michael Bloomberg be deprived of the post of Mayor of New York for reason of deeply immoral acts perpetrated by him, of antipatriotic activities, which are in categorical opposition to the will of the electorate.

We place our signatures in first place under this appeal: